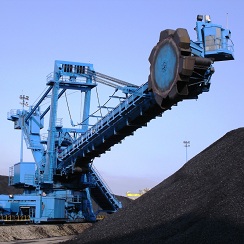 By focusing on providing highly customized automation and supervision systems, we are a safe pair of hands for all your projects, as illustrated by the examples below.

In the context of machinery, a specialized contract concluded by CMR included the renovation of a crawler engine system for one of the largest power plant operators in Europe. This project covered the wheel excavator, the load-bearing belt, the lift arm, the arm rotator and the main energy source to improve the efficiency of coal transportation.

This project involved the replacement of eleven engines and the maintenance of two other engines. The project also covered the deployment of associated equipment such as hydraulic motors and lubrication pumps.

Implemented with Schneider PLCs, CMR has been able to carry out the renovation on time and according to strict specifications, validating advanced calculations to control the speed of movement, orientation and lifting.

A defense project used a CMR-based custom automation system, as part of a submarine deployment in Europe, which involved the creation of an automated weapons management system implemented within a framework. of Schneider automaton.

CMR also has many years of experience in providing industrial automation services to customers in the process industry such as those involved in food and beverage manufacturing, building products, chemicals, petrochemicals and utilities.